Norway security company build a devise to stop malicious code from triggering malfunctions, disruptions, or even the unthinkable.

"Norm", as they are called, is selling a box that just might save the world from the a potential cyberattack. Take the malware "Flame" that's currently under investigation. Norm claims its new box could stop Flame and malware like Stuxnet. Norman SCADA Protection (NSP) will neutralize the two main vehicles that malware likes to spread through -- networks and external storage devices like USB sticks. Norman's box is essentially a terminal that's set up in line along the network to scan all the data coming in and out of the downstream industrial control system. "It's an antivirus on a cable," Norm's Product Director, Øivind Barbo, says.

It is like an X-ray scanners at airport security. It does a scan of the contents of everything passing through. The terminal is the size of a desktop computer, it's plug and play, and it starts scanning and stopping any threats that might unintentionally try to transfer immediately. The terminal also serves as a checkpoint for USB sticks and other external storage. External devices are scanned for threats and either approved with a tiny encrypted file or they are rejected. A small driver installed on the console then looks for that encrypted file whenever a USB storage device is inserted to verify that it isn't infected. 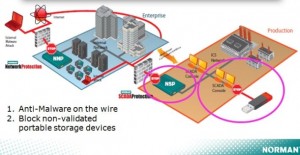 At issue. Many networks and administrators that run energy facilities, water treatment stations, and other industrial control systems (SCADA Systems as they are called) don't employ even basic antivirus software. Many industrial control systems are custom-built and require precise timing. This means traditional antivirus tools can't run along side these systems. Consequently systems a lot of what we depend on each day for basic necessities are exposed.