The new evolution in television: Twitter partners with Comcast

Spoiler alert! Twitter is partnering up with Comcast and NBCUniversal to take advantage of the platform millions of users who are posting spoilers, expressing confusion outrage and sadness while watching their favorite television show. Now when you see a tweet about the Voice that piques your interest, you’ll be able watch it, record it or change your channel right from the tweet itself.  When Nielson launched its Twitter TV Rating system it seemed like the next evolution would be to convert the conversations into actual viewership and now we have it.

SEE IT, which will be available only to Xfinity TV customers, and will hit the Twittersphere in November for select programming on NBCUniversal’s networks.  So when something starts trending on Twitter or a mysterious hashtag starts to show up and you MUST KNOW WHAT IS GOING ON, you can simply click a button and you're seeing what everyone is talking about. And this is just the beginning. "In early 2014, we’ll also add other video distributors to See It; tweets with See It buttons will be available for shows on multiple networks; and, the feature will be available on sites and apps across the web," " Sam Schwartz, Sam Schwartz, Comcast Cable’s Chief Business Development Officer said in a post on the company's blog. 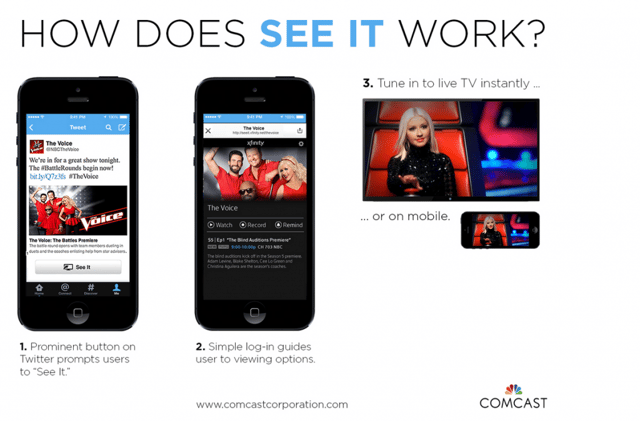