An extensive study by Campaign Monitor, a service that allows businesses to attract new subscribers by sending attractive email newsletters, helps to reveal the mobile email habits of consumers. From data collected in 2013, they reviewed 780 million email opens on a mobile phone originating from 2 million campaigns, which were sent to roughly 2 billion email addresses.

They discovered that, on initial viewing of the email on smartphones or tablets, 8 percent of recipients clicked the email open right away. However, mobile devices had a higher second-open percentage, with 23 percent opening the email again at a later time.

But desktops are not to be ruled out. In terms of second-opens, 12.9 percent of opens on desktops converted into clicks, contrasting 7.8 percent of later opens on a mobile device.

The study also broke down email opens on multiple devices and operating systems. iPhones represented the biggest sample size – out of 780 mobile devices, they comprised 61 percent of mobile opens.

Here’s what the rest of the stats look like for iPhone users:

The stats regarding iPad users:

Twelve percent of the 780 million mobile opens were from an Android. The difference with Android, however, is that, unlike Apple devices, images do not automatically load on Androids. Still, the study received a sample size of 93.6 million opens.

Another interesting study comes from the Monetate Ecommerce Quarterly and focuses on eCommerce business and email conversion rates. The latest Monetate quarterly study documents conversion rates to add-to-basket, shopping cart and sales across the previous 4 quarters. 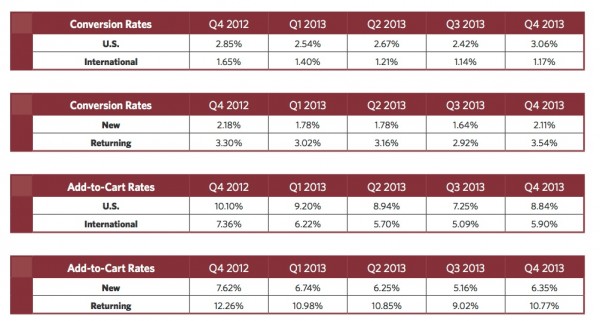 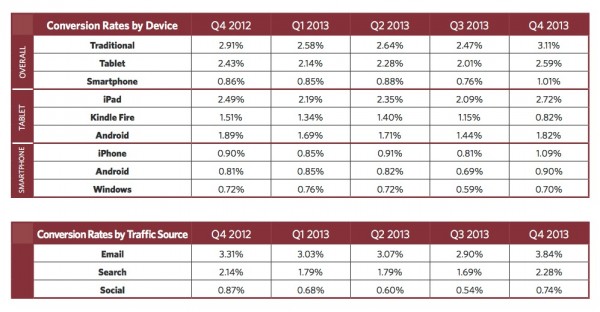 For eCommerce marketing, tablet and iPad email conversion rates are similar to desktop (traditional) conversion rates. This fact suggests that people are becoming increasingly comfortable with the experience of eCommerce buying on tablets.