How to Use Hashtags

A #hashtag is a word or a group of words that provide a means of grouping related posts on social networks like Twitter. Users can search for a particular hashtag and get the set of posts that contain that hash tagged word. Use hashtags to search on social media for particular topics, share your posts to broader audiences, publicize content and grow your following. Use Hashtags two ways, as part of your postings and a way to find what your looking for. 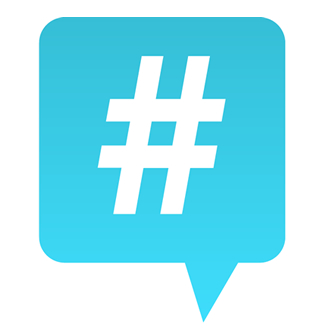 Add hashtags to tweets - Hashtags are one of the most important ways of organizing information on Twitter. Anyone can create a hashtag by typing a phrase in the form “#tag” in a tweet. For example, if you were tweeting about social networking, use the hashtags #facebook, #twitter, or #pinterest. That way, anyone searching for #facebook, #twitter, or #pinterest would see your tweet. After a hashtag has been created, other users can use that hashtag in their own tweets to add to the conversation about that topic.

Create a hashtag - It is exactly the same as including an already existing hashtag. Simply type a hashtag in the form “#tag.” Keep in mind that hashtags begin with the “#” and ends with its first space. Now, every time someone includes your hashtag in their tweet, it will be added to the results page for that tag.

Use an existing hashtag - You can do this simply by typing a phrase of the form “#tag” and a tweet will appear in lists of tweets with the same hashtag in blue type. Your tweet will now appear when other users visit the hashtag page.

Do it Right - When using hashtags, observe hashtag etiquette. Twitter's best practices suggest you not use more than two hashtags in the tweet because this can dilute their usefulness for other users so only use hashtags that are relevant to the topic you're tweeting about.
Using Hashtags as Navigation

Navigate Twitter using hashtags - Clicking on a hashtag found in a post will send the user to the search results page with other tweets that contain the same hashtag. In the “Trends” sidebar, view hashtags that are currently the most popular on Twitter.

Find interesting hashtags - There are many ways to find hashtags related to subjects that you are interested in. But the easiest is to read through the Twitter feeds of people you follow, and click on any hashtags that you find interesting.

Hashtags in everyday life - Live events like awards shows and sporting events include hashtags so that watchers can easily participate in live discussion. Advertisers are adding hashtags to their packaging and social groups are being formed around their hashtags to build membership. There are many sites that aggregate and share hashtags, making it easier to find hashtags.